After years of refurbishment the Neue Nationalgalerie museum in Berlin has shed its cloak of scaffolding and has emerged into public view. At first glance it seems not much has changed, which is exactly the intention of David Chipperfield Architects who were commissioned to take charge of the first major renovation of the building since it was built in 1968. The practice has a diverse international body of work and has ‘won more than 100 international awards and citations for design excellence.’ The team at David Chipperfield Architects in charge of this project describe themselves as ‘invisible architects, striving to keep ‘as much of Mies as possible.’

They are referring to Ludwig Mies van der Rohe, one of the last directors of Germany’s famous avant-garde design school, the Bauhaus, and the architect who designed the Neue Nationalgalerie. Mies sought to establish his own style of architecture to represent modern times and the advancement of technology in the early twentieth century and embraced the aphorism ‘less is more’. The Neue Nationalgalerie is the only European building Mies designed after leaving his native Germany and emigrating to America before the Second World War.

Speaking on his practices’ refurbishment of the museum, the firms founder David Chipperfield stated, “Taking apart a building of such unquestionable authority has been a strange experience but a privilege.” He went on to describe the refurbishment as “surgical in nature” as they addressed technical issues whilst protecting Mies’s vision.

David Chipperfield Architects practice is characterised by  ‘meticulous attention to the concept and details of project’ and their ‘relentless focus in refining design ideas’ and this was evident in their aim to produce, not a new interpretation of the Neue Nationalgalerie, but a respectful repair. They accepted signs of ageing in the fabric of the building as long as it didn’t not impair visual appearance or usability.

Mies often described his work as ‘skin and bones architecture’ and this Miesian principle is something Martin Reichert, Partner and Managing director of David Chipperfield Architects Berlin, uses to describe the renovation process. Calling the original surfaces the skin, and the shell construction the bones, he stated that these were kept, as they were ‘the most important characters of material heritage’. However, much of the ‘meat’ of the building, such as plaster, wire ceilings and porous concrete, was lost, aside from a small amount that was retained as evidence in preservation zones.

Issues such as condensation were addressed by bringing the building closer to Mies original design. The original underfloor heating, which had been taken out of service at an early stage due to steel pipes becoming corroded and leaking, was restored making ‘an essential contribution to stabilising the indoor climate.’ In the case of unavoidable interventions, such as adding previously non existent disabled access, the changes are described as only ‘discreetly legible’.

The museum is expected to reopen to the public in August 2021 and more information on the restoration and opening details can be found on the Neue Nationalgalerie website . 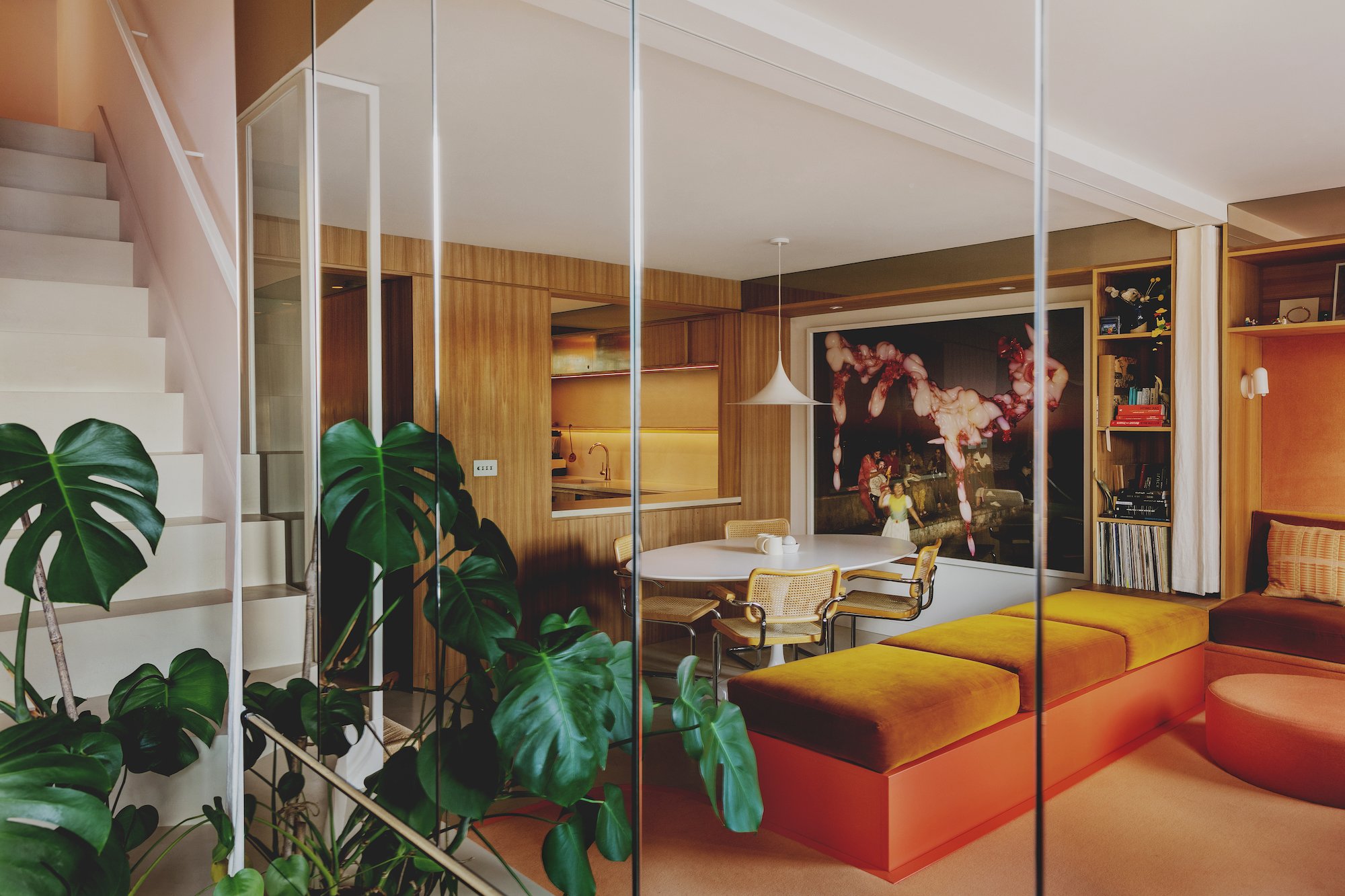 North London townhouse Canyon House has been transformed from a bedsit into a stunningly vibrant 70’s Californian-inspired home by Studio Hagen Hall, “a multidisciplinary architectural and interior design studio that focuses on crafting exceptional spaces.” The clients, Ben Garrett and Rae Morris are both recording artists and while they fell in love with the essence of the house, including the well-established garden and good location, much work was needed to enliven the place. Originally the property had been divided into three separate bedsits with the use of awkward partitioning that split the house. The entire interior needed to be gutted and Studio Hagen Hall used digital modelling to reimagine how the space would be used allowing the clients to use a VR headset to experience the design ideas. A recording studio was also incorporated into the new design of the interior. Drawing on 70s influences the intro design is a mix of warm wood, lush mustard velvets and vibrant peaches. NR Magazine joins Louis Hagen Hall, founder of Studio Hagen Hall, in conversation. 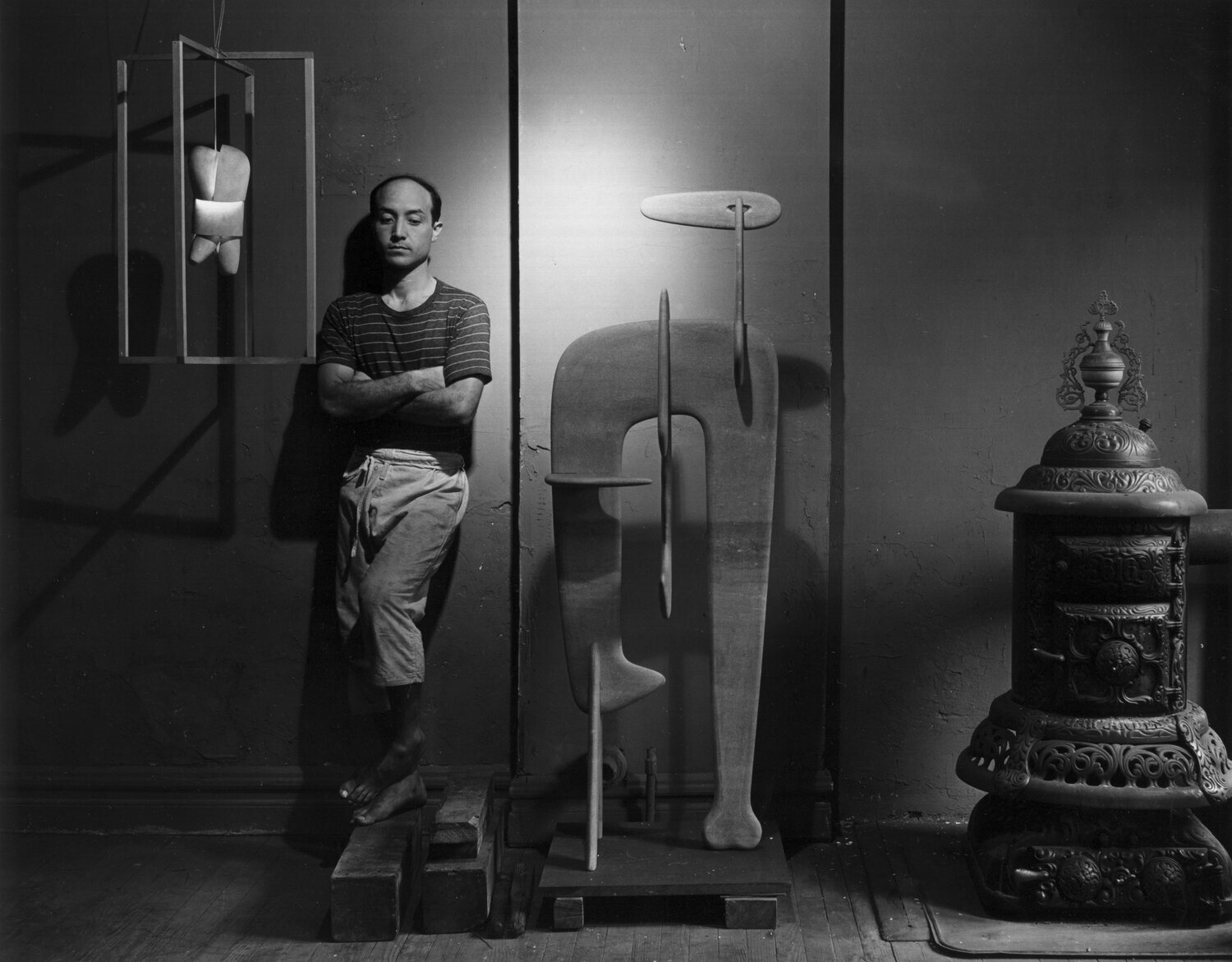 Japanese American designer and sculptor Isamu Noguchi was of “the most experimental and pioneering artists of the 20th century”. His exhibition at the Barbican displays over a hundred and fifty works from his career which spans over six decades and explores his life, work and creative method. The best way to describe him is a ‘creative polymath’ as his work straddled a multitude of disciplines. 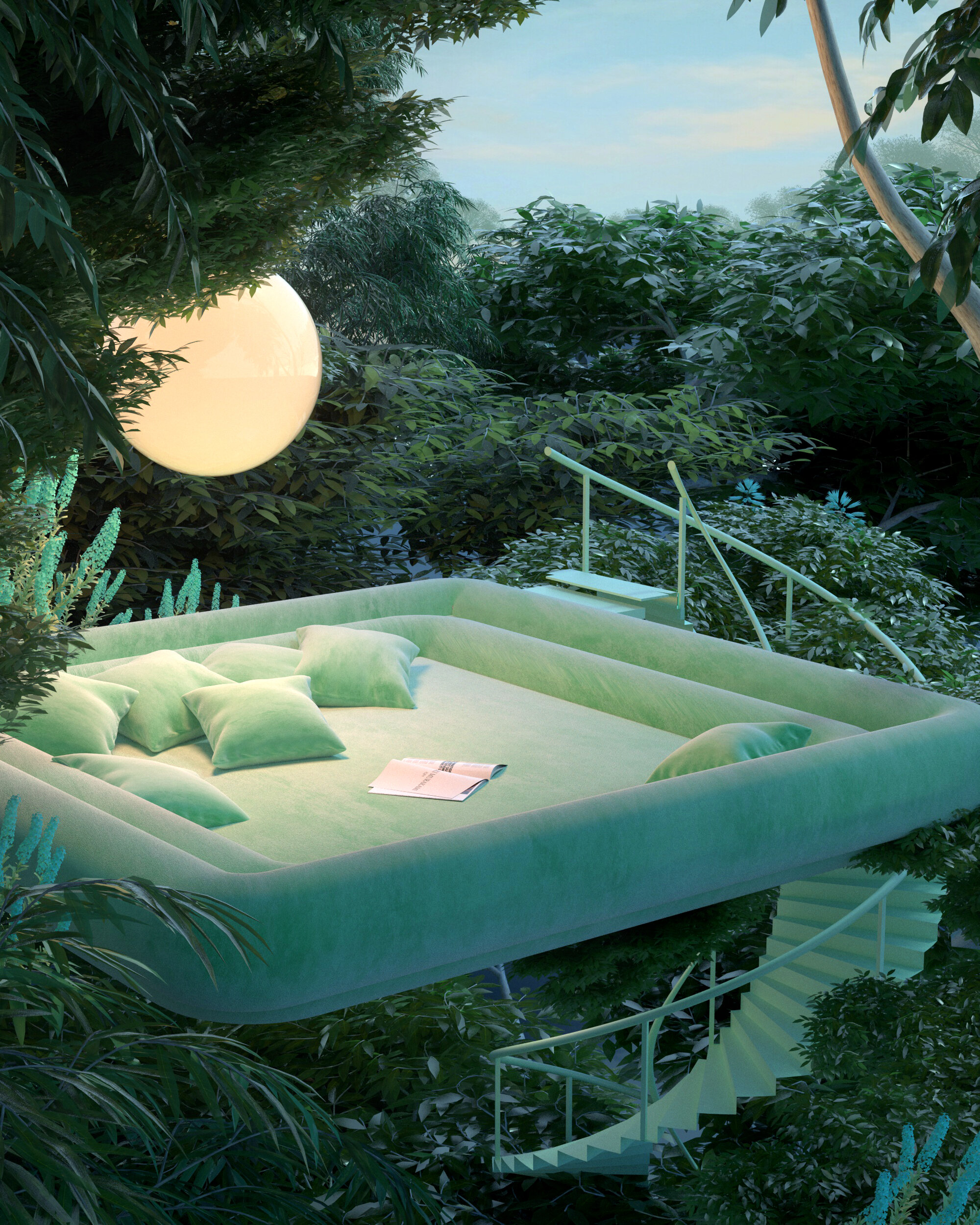 Joe Mortell is a 3D designer based in London, whose work combines the efforts of creative direction, animation and illustration to construct elegantly rendered interiors and landscapes. Often merging into one another, Mortell’s interiors and exteriors integrate to form a unique and surreal aesthetic, crafted with a high level of detail. Mortell’s 3D rendered environments have a comfortingly familiar, dreamlike quality to them. With their carefully stylised compositions and polished imagery, it is as though we’ve been given a glimpse into a digital utopia. With ambient lighting, inventive furnishings and alluring textures, Mortell’s work transfigures the digital realm into something almost tangible. Initially moving to London to study graphic design before specialising in 3D work, Mortell has built a vibrant and impressive career, working internationally with the likes of The New York Times, Wallpaper*, Selfridges, Louis Vuitton, Moët Hennessy, Youth to the People and more. NR Magazine speaks with Joe to learn more about the details of his 3D designs, pop culture influences and creative process. 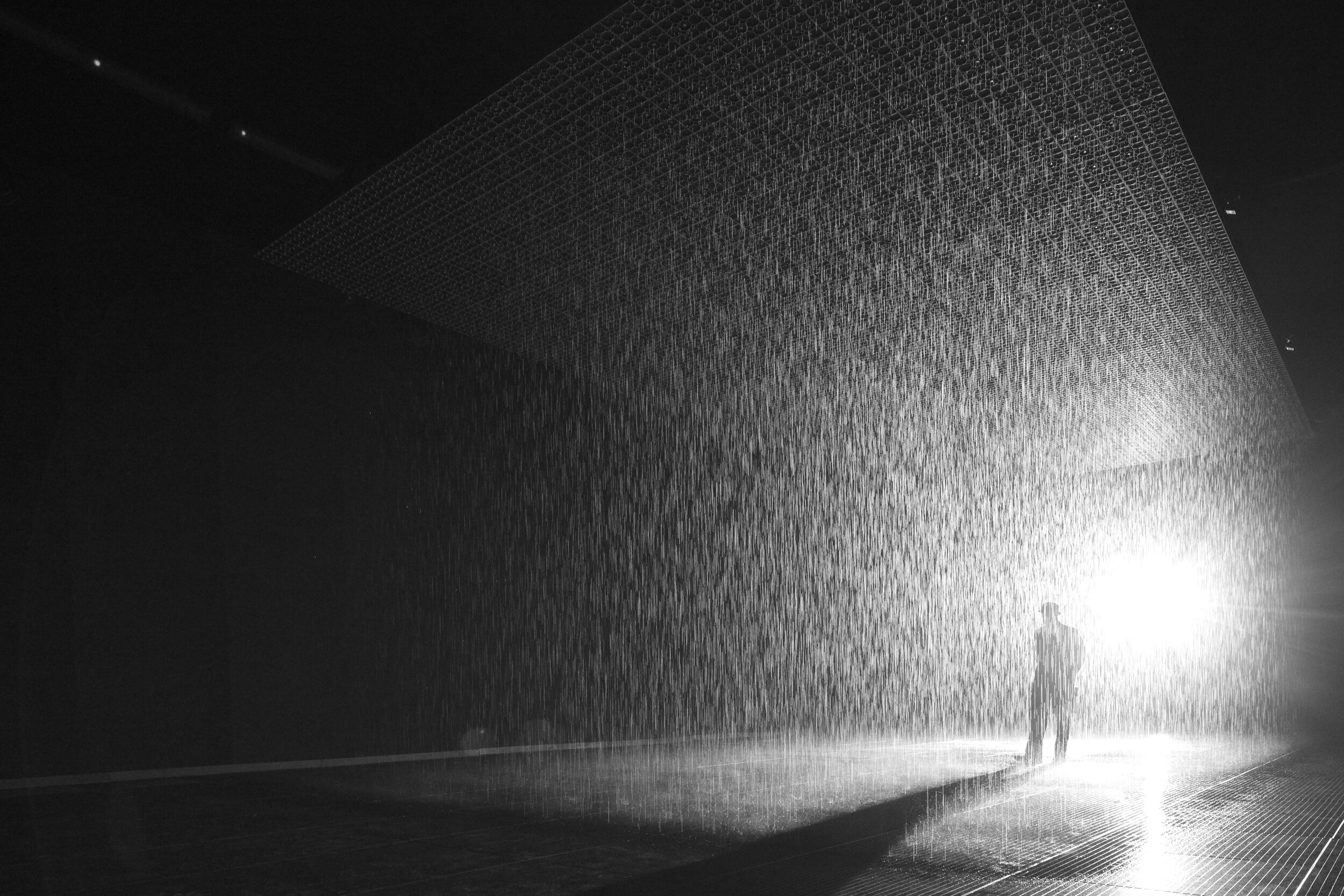 Jul 13, 2021
Random International: Identity And Autonomy In The Post-Digital Age

Have you ever stood in the rain and not gotten wet? If you ever visit Rain Room created by Random International, a collaborative studio founded by Hannes Koch and Florian Ortkrass, then this is something you can experience for yourself. Rain Room is an interactive art work that uses motion sensors to allow visitors to walk through an artificial downpour without getting wet and is the work that thrust the art collective into the public eye in 2005. Since then Random International has continued to create work that invites the viewer to actively participate and questions “aspects of identity and autonomy in the post-digital age.” The collaboratives studio’s aim to “explore the human condition in an increasingly mechanised world through emotional yet physically intense experiences,” and they “aim to prototype possible behavioural environments by experimenting with different notions of consciousness, perception, and instinct.” NR Magazine joins Random International in conversation. 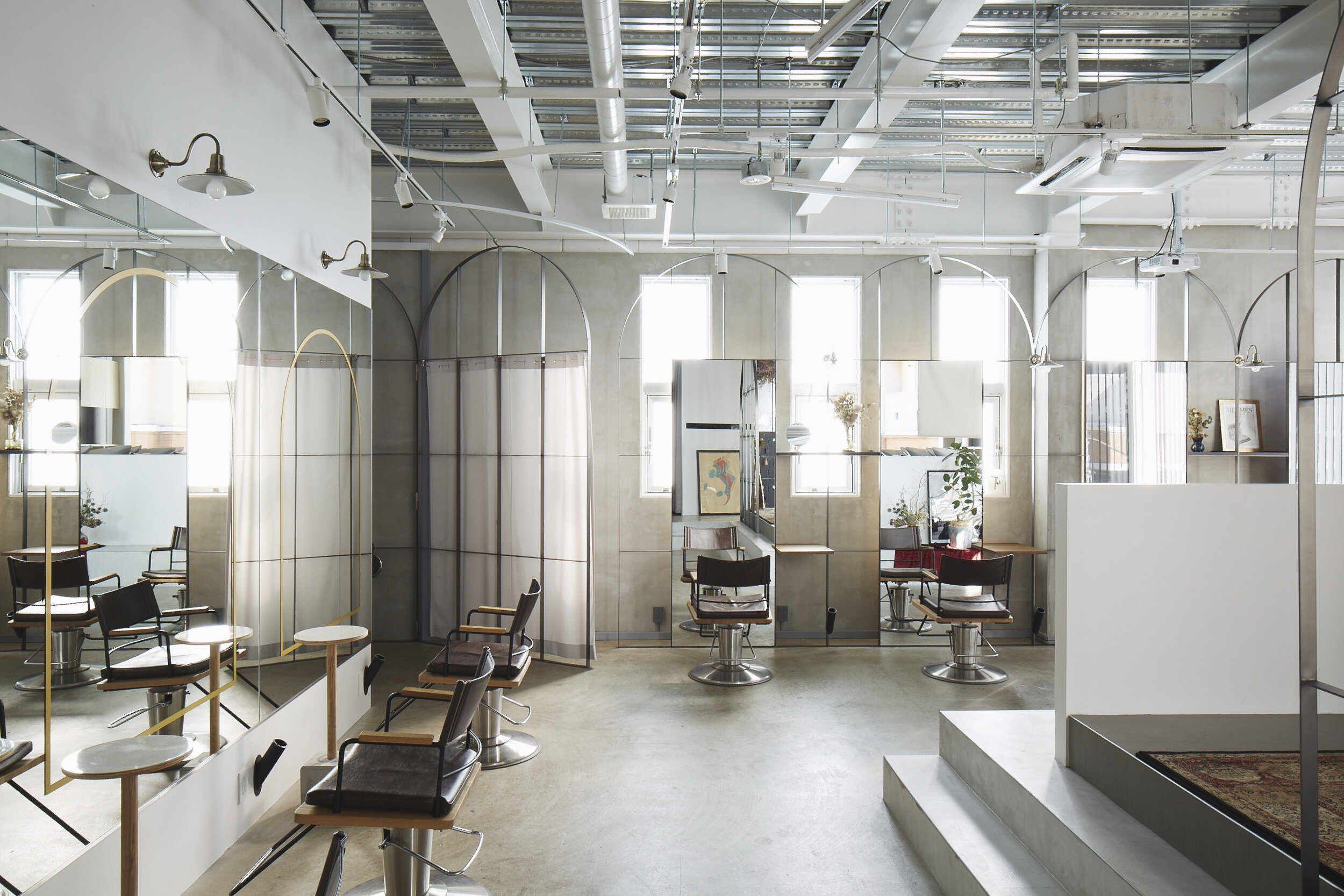 Architectural duo Yuki Mitani and Atsumi Nonaka are known for their minimalist architectural work under the moniker Nanometer Architecture. Taking inspiration from traditional Japanese design the pair focus on the smaller details when working on a project. “We believe that building an architecture is like a supplement for the ultimate goal, providing a place, proposing an event, and then inducing it to create an atmosphere.” NR Magazine joined them in conversation about their practice. 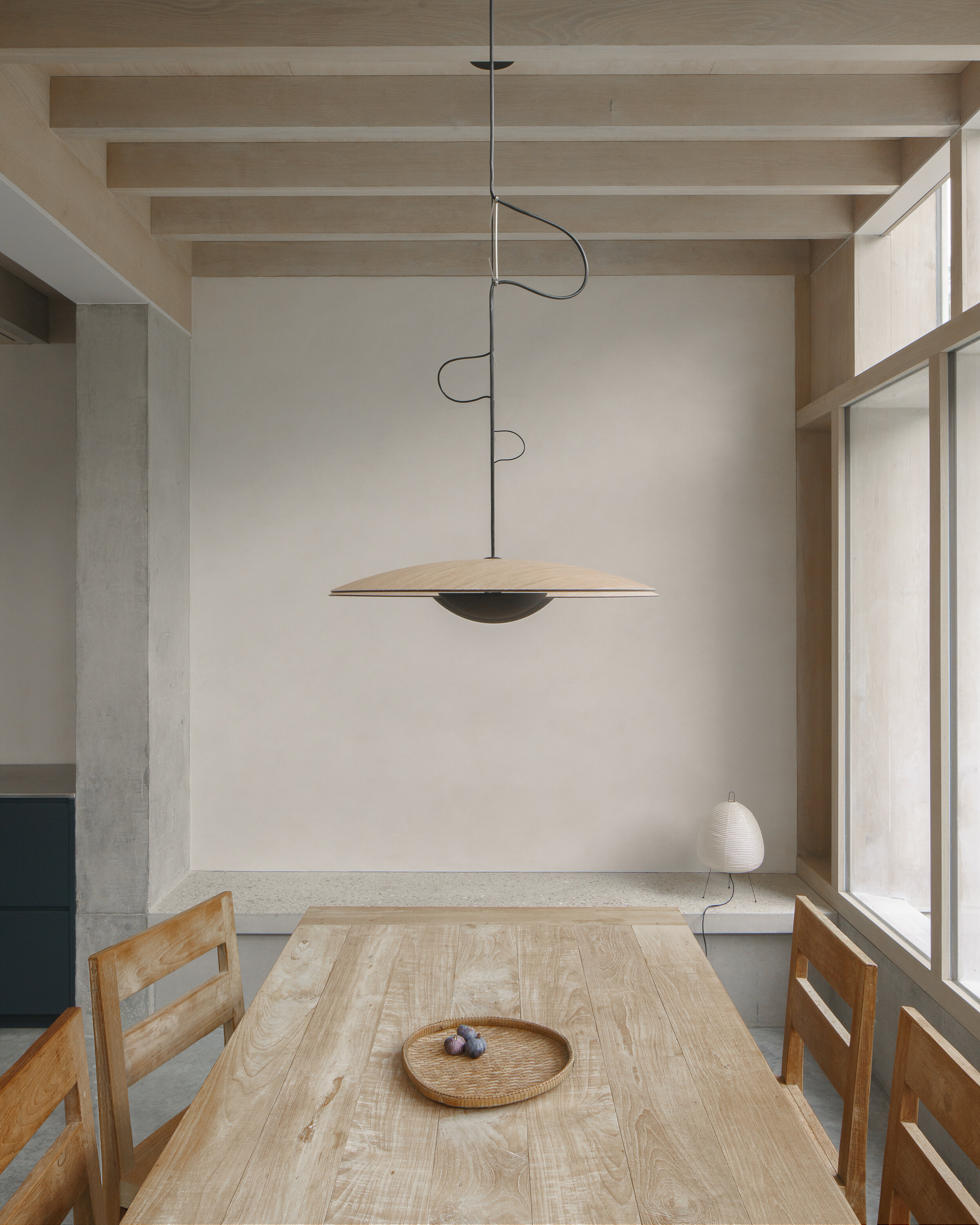 Founded in 2016 by Daniel Goodacre and Geraldine Ng, DGN Studio crafts customized objects and spaces informed by utility and the context of their surroundings – an approach to design that is instilled with a deep sense of care and attention to detail. The architecture studio aims to enhance the everyday living experience of their clients, and advocates for a carefully considered use of materials. NR Magazine speaks with DGN Studio to get a deeper insight into their design values and to discuss the details of the project. 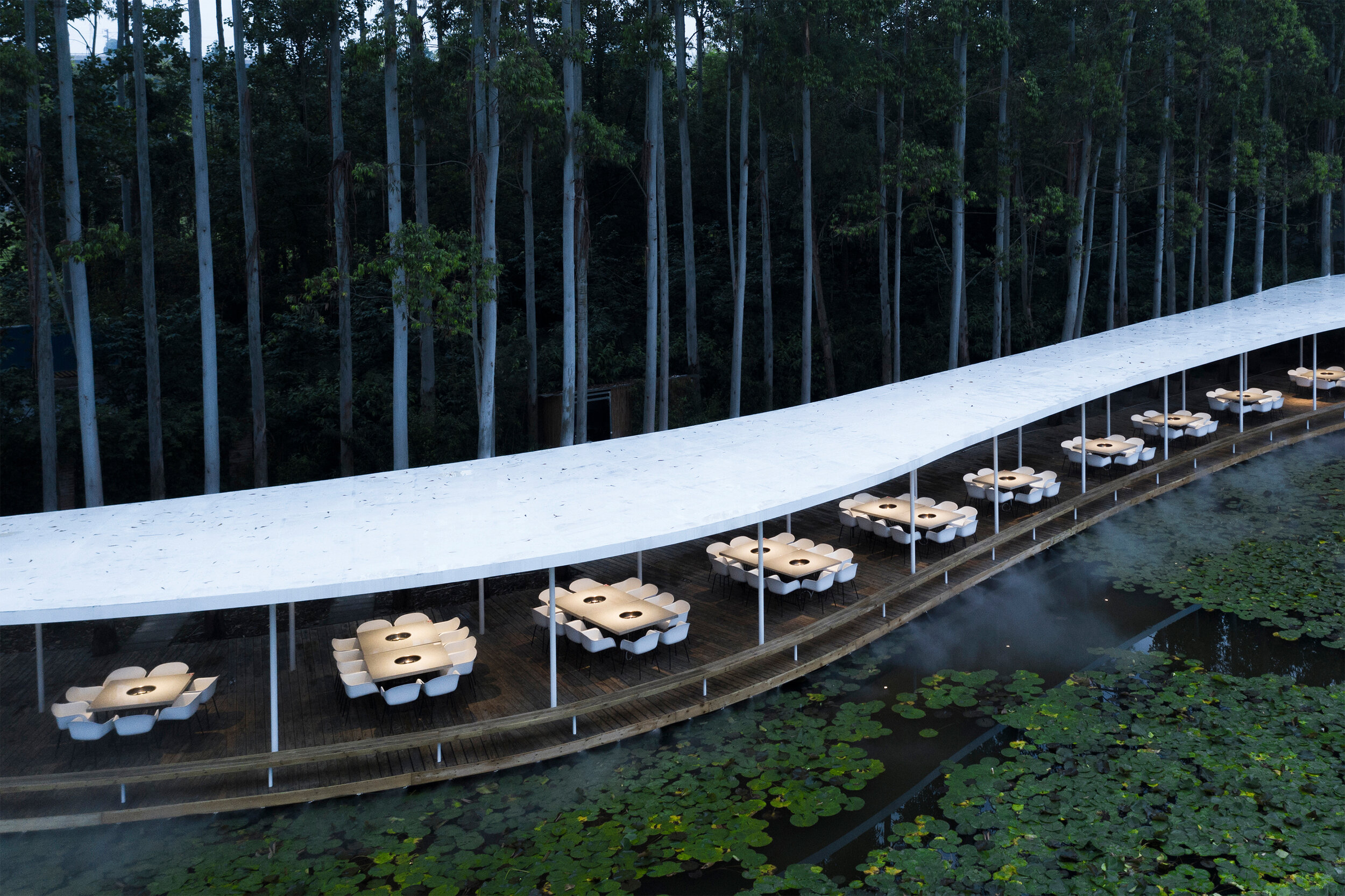 May 26, 2021
In Conversation With MUDA Architects In Chengdu, China

Garden Hotpot Restaurant designed by MUDA Architects is located in the Sansheng Township in the suburb of Chengdu, China. Surrounded by a lotus pond and nestled in the midst of a eucalyptus forest, the building’s unique design reflects the beauty of the natural landscape and pays homage to the established traditions of hotpot culture – the area’s traditional cuisine where a simmering pot is served at the table. The overall aim of the design was to minimise human intervention and enhance the interaction between the guests and nature. NR speaks with the architecture studio to learn more about their approach to sustainability and design. 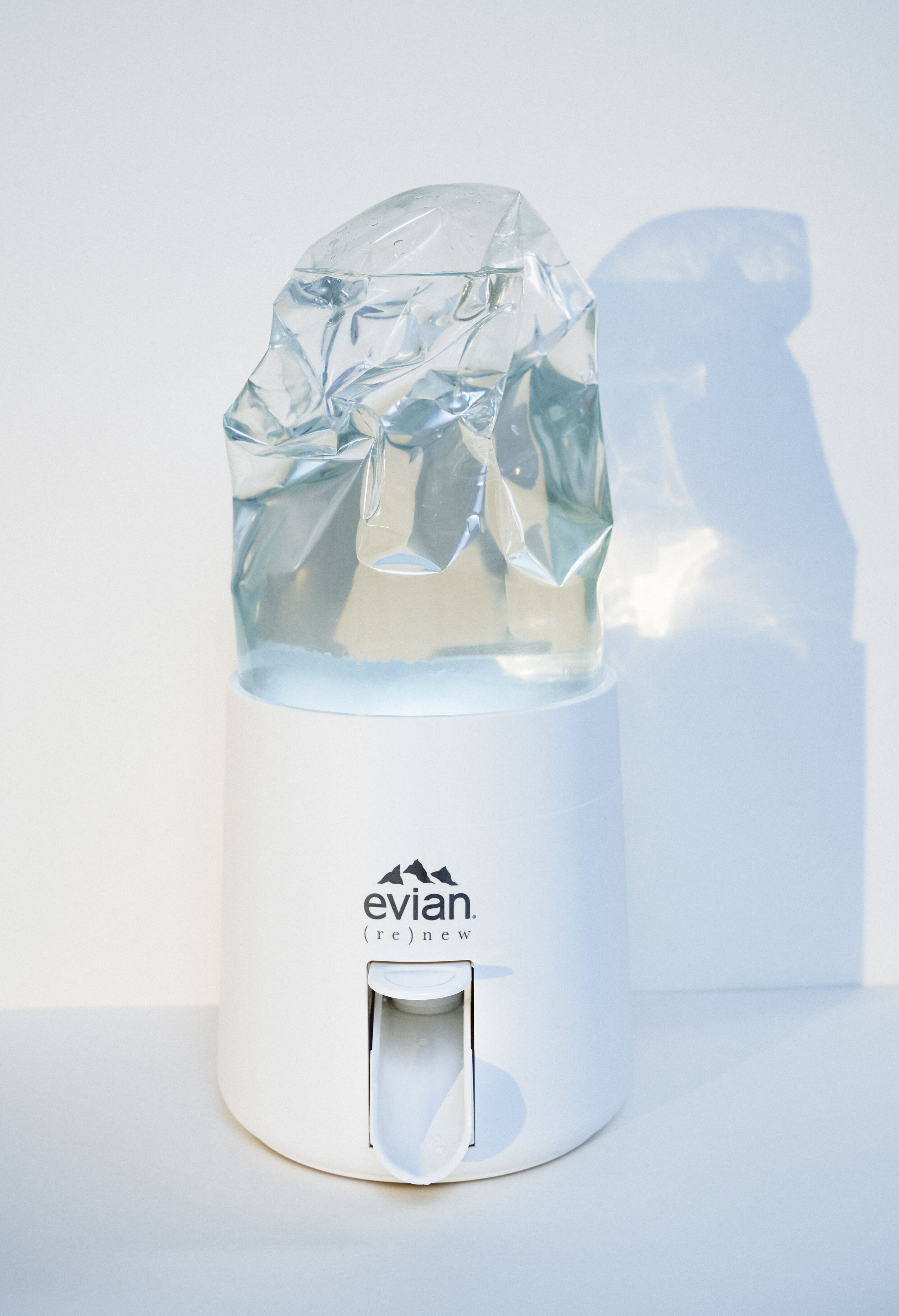 evian introduces their new re(new) device – a step forward for the brand’s sustainability and dedication to design. The device features an innovative and eco-conscious ‘water bubble’ that offers customers a unique drinking experience, with a 60% reduction in plastic packaging. NR speaks with Julian Humbert, evian’s lead in Global Innovation Marketing, to discuss the inspiration for the device’s design and the brand’s sustainability goals. 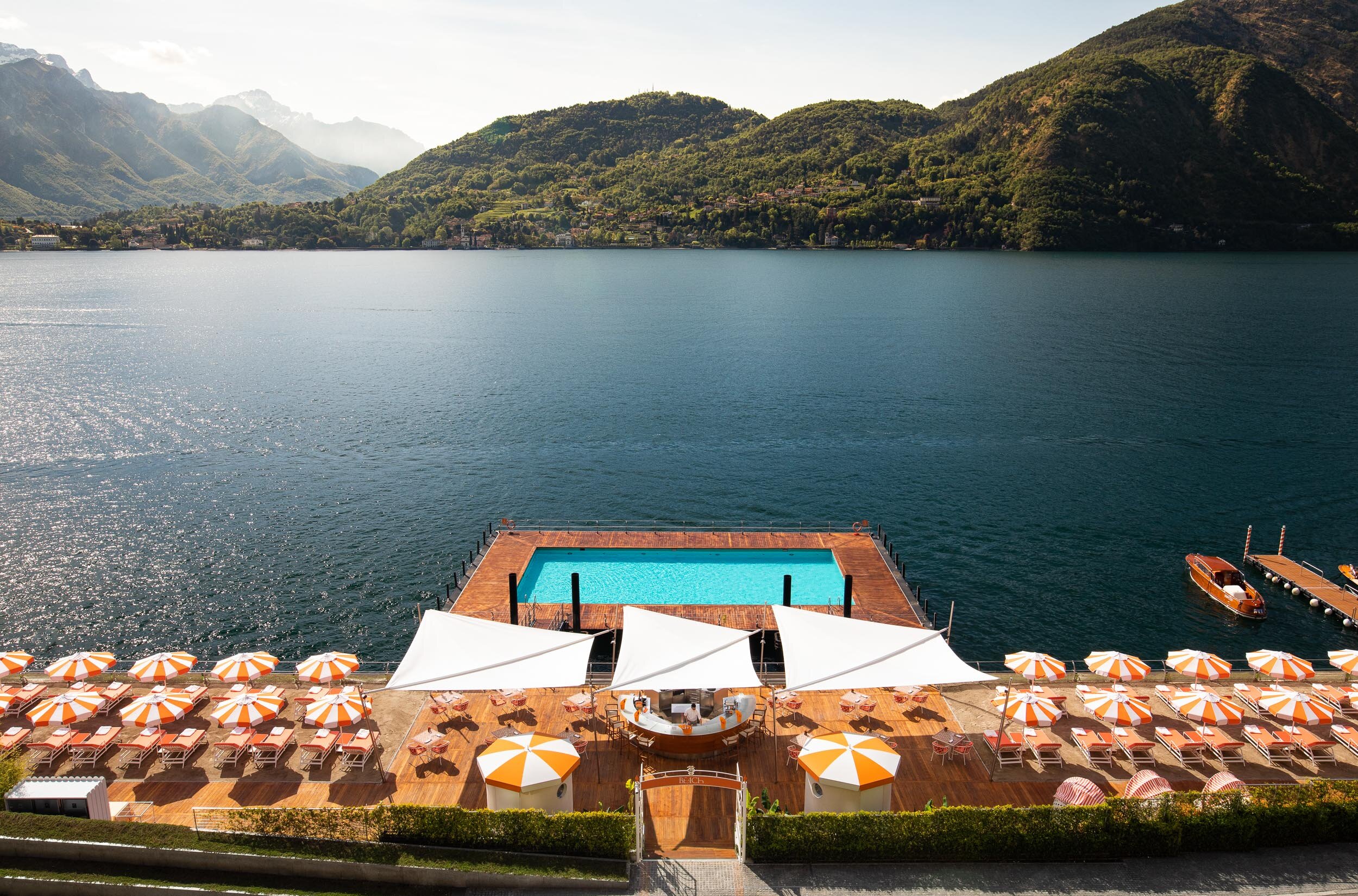 Beautifully situated on Italy’s Lake Como, the Grand Hotel Tremezzo is rich in history, tastefully traditional, and offers a taste of la dolce vita with its spa, luxury boutique, waterside bars, and in- house Italian dining. The hotel’s latest editions include its beachside restaurant Giacomo al Lago, which marries the renowned fish dishes of Giacomo Milano with stunning views of Lake Como’s dynamic scenery, as well as the brand-new luxury boutique Sense of Lake, which promises mementos of the elegant and timeless charms of Lake Como to its customers. 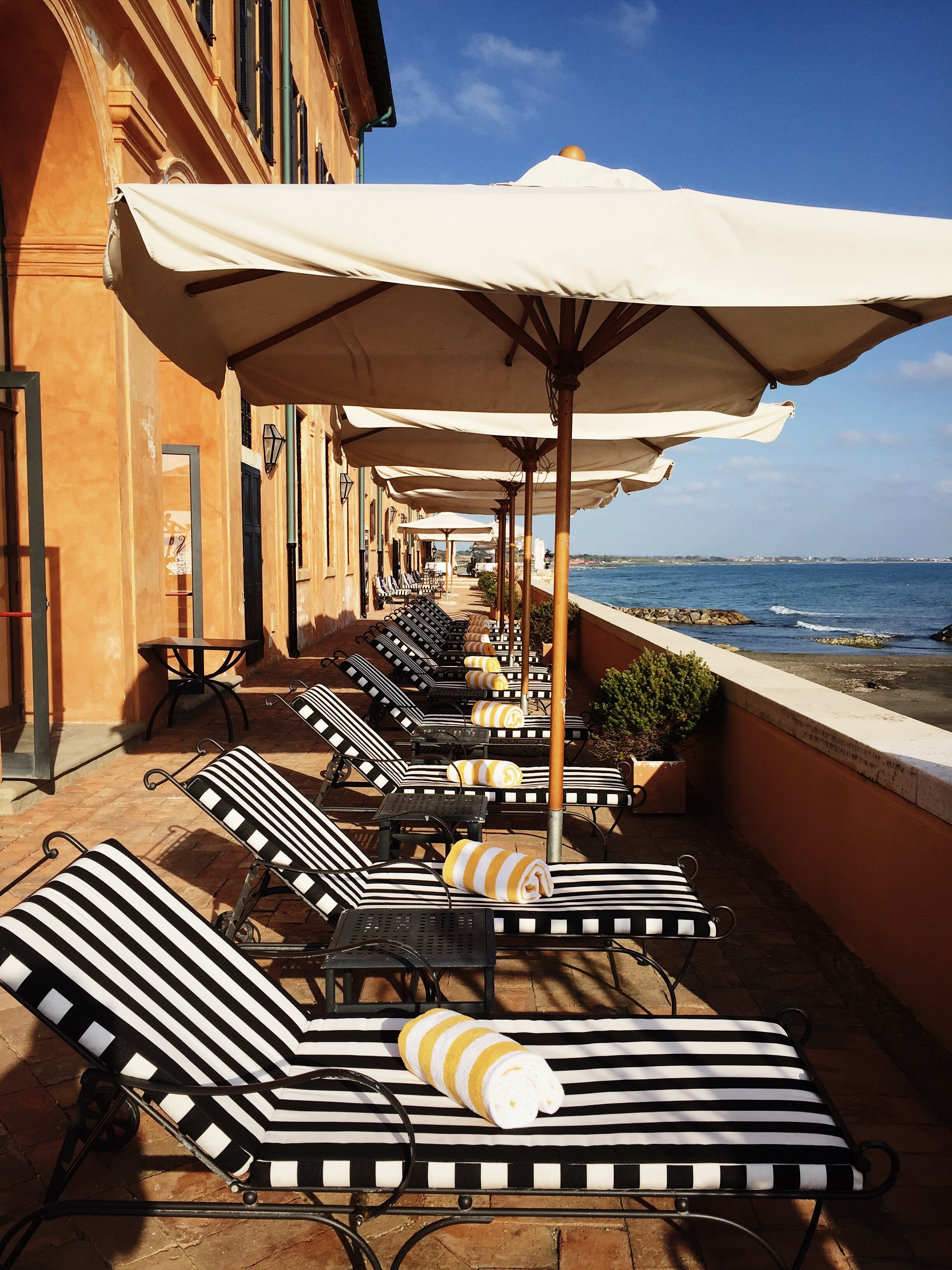 Jul 25, 2021
Inside One Of Italy’s Most Iconic Hotels: La Posta Vecchia

Just a short drive from Rome, La Posta Vecchia resides in the stunning seaside of Palo Laziale, and completes the iconic hotel triad with Hotel Il Pellicano and the Mezzatorre Hotel. The historic villa is steeped in Pompeian and romantic Renaissance history and offers guests the chance to relax in contemporary style. Nestled by the Thyrennian Sea, the location has long been favoured by tourists and loyal guests. And with just an 18-mile trip to the airport, 24 miles to reach the centre of Rome, La Posta Vecchia is the perfect place to stay for those looking to enjoy day trips.