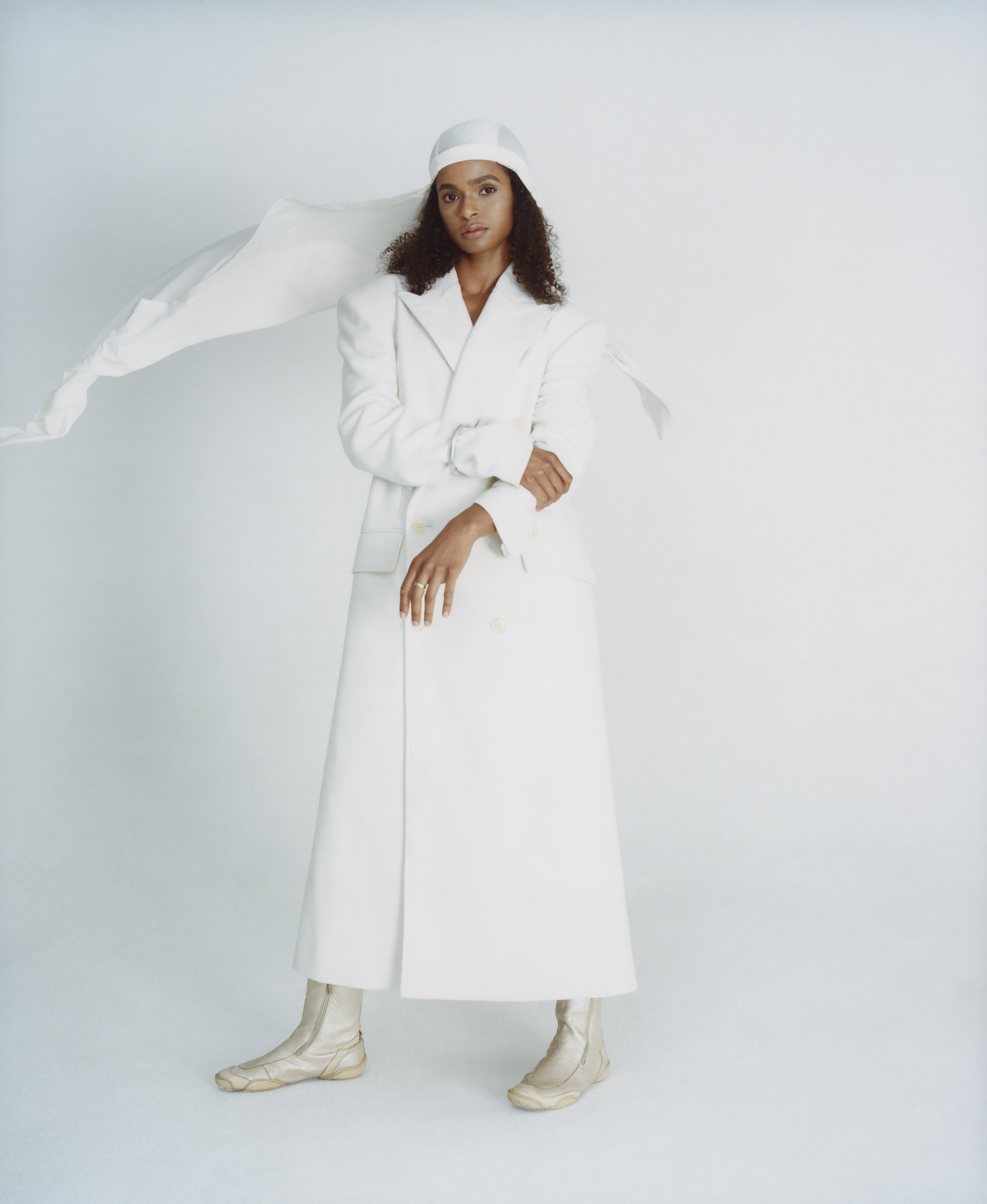 Ramla Ali’s enlightening fight in and outside the ring

Professional boxer Ramla Ali (born in Mogadishu, Somalia) is definitely one of the forces of change of our generation. The featherweight boxer became a voice for refugees as she herself had to seek refuge with her family in the United Kingdom, from war-torn Mogadishu in Somalia in the late 1990s. Having earned a first-class law degree at the respected SOAS University of London, and delving further into her successful professional boxing career, Ali is forging for herself and others a trailblazing path ever since the undefeated boxer (7-0 in her professional career including two knock-outs)  won the English title in 2020. Making history at the Tokyo Olympics by earning a bronze medal and thus becoming the first Somali women to compete in boxing, at the Olympics, Ali is showing through the years, her perseverance despite what she has been through, and her determination in changing the game. Earlier this August, Ali performed a career stepping fight against García Nova in Saudi Arabia, as the undercard on the Anthony Joshua and Olexandr Usyk fight. Her career in fashion as a model and public figure has also been a way to provide representation for young women. As a Unicef ambassador and having funded the non-profit organisation Sisters Club, in 2018 in London, providing a safe space and free sport classes to women, Ali’s activism serves an amplifier for social causes, more specifically women’s rights and equality.

Ramla it is such a pleasure and honour to have you as one of our cover stars for this issue.

Firstly, I wanted to congratulate you for your recent wins on your fights against Agustina Rojas at the o2 in London and against García Nova in Saudi Arabia. How are you feeling now?

Honestly, A little tired. I had two back to back camps with little time to give my body any rest. But I wouldn’t change it for the world.

A career stepping stone recently was your now historic fight in Saudi Arabia earlier in August against García Nova, as the undercard on the Anthony Joshua and Olexandr Usyk fight. How was the preparation leading up to it?

This fight itself was the most important of my career and throughout the training camp there was a pressure to perform and showcase women’s boxing, as I wasn’t just representing myself but also all women in combat sports. So the world can see that we deserve the same platform and opportunities as our male counterparts. My training was located in Southgate, adjacent to Compton in Los Angeles under the guidance of legendary coach Manny Robles who has been responsible for a number of world champions. It’s not an easy regime with Manny and I’ve chosen one of the hardest gyms in the world to train at but with this, comes the experience of being alongside some of the greatest talents in the sport today.

“My life has never been easy so I naturally have chosen the hard path to get prepared. “

It has only been since 2012 that Saudi women were able to compete at the Olympics in boxing. Your presence there is also a step towards equality in the country. What was it like, as a Muslim woman to be able to fight professionally in your holy land? And how do you wish this impact the future generations?

2012 was when women were first allowed to compete in the Olympics but Saudi Arabia as a country only allowed the participation of women in combats even more recently than this, my fight recently being the first professional female fight in history there. The hardest part though as I had the support of the promoters, and the region was really trying to educate people on why we choose to do this.

“My goal has always been to break down barriers for women and this competition allowed us to continue pushing for greater equality and inclusion in our sport.”

I was also fortunate enough to perform Umrah whilst in Saudi, which was an incredible experience getting to visit Mecca for the first time in my life.

How do you usually work with your coach and how was it to train under the supervision of the legendary Manny Robles?

Working with Manny has opened my eyes to the very elite level of boxing training. Whilst in Los Angeles, I train twice a day, six days a week. Followed by one additional remedial session, two sports massages and one physiotherapy session (dry needling, cupping etc) and a further 2-3 sessions spent in a Hyperbaric Oxygen chamber. I do two sprint track sessions a week and one long run. I spar three days a week, followed by further boxing sessions for either technique or conditioning and then I also employ world famous strength and conditioning coach Mattias Erbin from Argentina who looks after all my strength, conditioning and recovery work. Mattias has worked with Lucas Matthysse, Jorge Linares, Brian Castano, Jamal Herring, Vergil Ortiz to name a few.

Do you have a favourite match of yours and what was so special about that fight?

In terms of amateur fights, it would have to be my African Zone Title gold medal in Botswana in 2019. The whole experience was just amazing, it was my first time at a championship in Africa which is the opposite of competitions in Europe or further a far. The fighters are tough and don’t stop but there is a real warmth and friendship between the countries and the teams which I loved. In terms of my favourite pro fight in boxing it would have to be Saudi because of the importance of the occasion and the fashion in which I won.

With each of your fights, it must be a constant progression and constant learning path. How was your journey to the Tokyo Olympics?

The journey to Tokyo over the last previous five years was a real adventure with my husband/manager Richard, who was also my coach at the time during my amateur days. From getting lost at 2am in West African ghettos trying to find our hotel with signal and not being able to speak the language, to desperately finding cheap place’s to wash our clothes in the slums of New Delhi before catching a flight to another tournament somewhere else in the world. Experiencing an Olympics Games during Covid. There was a lot of up’s and downs. I don’t feel like I got the full Olympic experience, but im so glad to have competed.

What have been the biggest challenges you have had to go through and overcome?

One of the biggest challenges like most female athletes in a male dominated support, is simply being a woman.

The biggest challenge for me initially was the lack of funding and support I received when competing for my native Somalia around the world. If people think it’s hard to compete as a woman in sport, it’s even harder as an African. I honestly don’t know how a lot of these incredible east African runner’s do it. I’m often told that women’s boxing is booming now and more opportunities are coming. Which to some degree is true but until more women tune in and support female athlete’s its hard to command pay and opportunity equality when our viewership is so much smaller than males.

When I fist started boxing, female boxers were so far and few that I didn’t even have a changing room in my local club. I either had to wait for each boy/man to get changed or walk home wet and sweaty.

Who/what has inspired you?

I’m inspired by so many. Jackie Robinson because of what he had to endure on his journey. Venus and Serena have done so much for women of colour in sport. Ilwad Elman in Somalia is a hero of mine.

You founded the non-profit organisation Sisters Club in 2018, in London which focuses on providing women with access to different sport disciplines including football, boxing and more.  Could you talk more about it and why you have created it?

Sisters Club is a charity I founded in January 2018 which has recently taken on funding support from Nike & Lululemon which provides free weekly boxing classes to up to 300 women across London in four locations. The classes are specifically aimed at religious and ethnic minorities and those that have suffered domestic abuse to learn self-defense through the sport of boxing. But it is an inclusive class that welcomes all women from all background, races and beliefs. We have recently started hosting events across other sports including rowing, running, basketball and football as well to give our ‘sisters’ the chance to experience others disciplines. My hope is to expand the initiative to the U.S, Africa and the Middle East with the help of future partners. I started it out of the need to ensure women who look like me and have shared experiences are not left behind due to their background or their financial situations. It was born out of a need to create a community and platform that provided the opportunities I felt I never had growing up.

Do you have any future initiatives planned in your native Somalia?

I do hope to have the chance of expanding Sisters Club into Somalia at some stage.

You have mentioned before that the career of a boxer is a short one. Have you already envisaged what you would like to do after?

I do live day by day and try to appreciate the experiences and opportunities that come to me in the present but yes I have already begun to lay the foundation for what I hope to be doing for the next twenty years post sport.

The theme of this issue is IN OUR WORLD. Which impact would you like to make in this world?

A quote that the great Mohammed Ali once said really resonates with me ‘your service to others is the rent you pay for your room here on earth’.

“For me, of course I’d love to be known for being an incredible boxer, but more than that, I want to be remembered for how much I helped others.”

For any distribution or advertising enquiries, please contact info@nr.world

© NR 2022 All Rights Reserved
NR is the property of NR WORLD S.r.l.
Made with sustainability in mind, nr.world is cleaner than 70% of web pages tested
Legal